GLOBAL AMBITION TAKE SHAPE With a vision to be one of the leaders in the world, Jolly Board Ltd. has embarked on a focused growth strategy ‘to become the largest manufacturer of specialized Construction boards and Bitumen Boards with the highest level of product quality at the lowest cost of production: The Company fuels this pursuit with cutting edge advanced technology and continuous innovation, both critical to any company that is in growth mode. The efforts are reflected in last year’s financial results, with an increase of 33% in export figures. Exports registered a good growth despite the Indian Exports being down 20% for last financial year. From being India’s largest manufacturer of fibreboards, the Company has been catapulted into a major player in the Asian Infrastructure market. Today ‘Jolly’ is an internationally recognized premium brand in the market with an undisputed quality and price advantage. 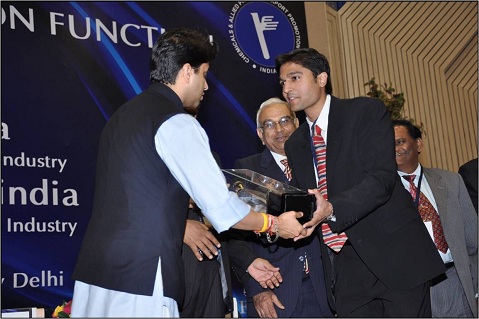 The company, under the stewardship of the father-son duo, Managing Director Arvind Jolly and Arjun Jolly, has maintained its margins despite significant increase in input cost, (especially raw materials with bagasse prices spiralling sky high last season due to poor monsoon). A winning combination of good marketing and cost effectiveness has put in place various measures that have cut cost and improved productivity to maintain margins. Focus on higher productivity, reducing energy managements and cutting wasteful expenditures has been Jolly Board’s main focus.

In an endeavour to discover new oceans Arjun Jolly had the courage to lose sight of the familiar but highly competitive local markets, fraught with competition from the small scale industries and substandard, imported products and sail through uncharted waters. With new opportunities abroad, exports soared and the Company registered nearly a threefold increase in exports in the last four years. The Company exports 70% of its production today.

In spite of cut throat competition from China and East Europe which have the advantage of Devalued Currencies and more efficient infrastructure to move goods, Jolly board has moved ahead strongly of all obstacles.

Jolly Bitumen Board is a specialized product developed by Jolly Board for the export markets and is used in all major construction projects and airports in the Middle East and Far East. The product which is especially suited to very harsh climatic conditions such as very high desert temperature, poor soil conditions, heavy wind and pressure conditions is suited for rugged construction environments. While the Residential and Commercial property markets collapsed 2 years ago, governments around the world continued spending on Infrastructure projects. Today Jolly Board is extensively used in the Middle east in Water Desalination projects, Power Projects, Gas pipeline works, Oil Storage terminals, New Oil refineries, Construction of Man made islands in the Sea such as those of the Coast of Abu Dhabi and Palm Jumeirah in Dubai, Bridge and High construction , and New Rail projects in the Middle East. Besides this Jolly board was also used for complicated projects such as the Burj Dubai, the tallest building in the world, the Dubai Metro, the new Jebel Ali Airport which is the largest airport in the world and various Hotel projects.

With the Supreme Court’s ruling prohibiting. the use of wood for making hardboards. the Company had to quickly reinvent itself with fresh capacities and products in Aurangabad and Sangli to sell High Grade Asphalt Board. Substantial investments ensured that operations were in full stream. Additions to production capacity coupled with better energy utilization enabled the Company to achieve better Economic Value Added Results. Innovative production technologies have improved product quality. The Company has received the prestigious ISO 9001:2000 accreditation and ISO 14000 accreditation. The company has imported a softboard plant from New Zealand to expand softboard capacity to meet the demand in the Far East market.

Giving a jumpstart to expansion of the businesses, the Company has made a successful foray into the Realty Sector with the development of an Information Technology Park in place of its manufacturing facilities in Mumbai. Construction is going very fast and two of its four buildings are already occupied and sold to banks and engineering companies. Nearly 10,000 employees of various companies are working in these buildings which have been developed under the Green Building codes which require energy efficiency. Enthused by the success of this venture the Company has confidently made aggressive efforts to create an opportunity for itself by developing realty in several parts of the State. The Plans on the anvil include Residential space and schools. Branching out into the hospitality business is also one of its main proposals.