RAISING THE BAR IN TURBULENT TIMES - The year 2008-09 was undoubtedly one of the most challenging periods In recent  history. Much has been spoken and reams have been written about the global economic downturn that ‘impacted markets worldwide. Amid this depressing scenario when India’s exports plunged into the deep dark as orders dried out from  almost all countries, Jolly Board held its own and maintained its exports to be eligible for the CAPEXIL Top Export Award even during one of the most turbulent years in the last eight decades! This has been a commendable achievement. 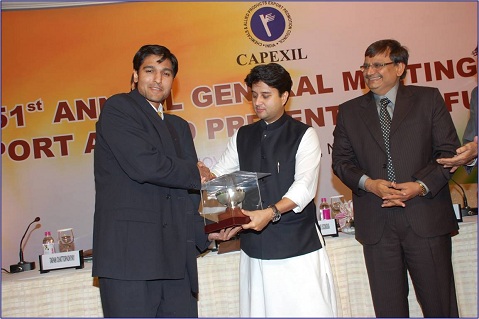 Hon’ble Union Minister of State for Commerce & Industry, Jyotiraditya Scindia presents
the CAPEXIL Export Award (2008-09) to Mr. Arjun Jolly, on November 27, 2009
Even, being India’s largest manufacturer of fibreboards and a major player in the global market could not insulate Jolly Board against the uncertainty of the past year. A slowdown in the economy means that one has to learn to run faster than one has in the past and also run faster than the competitors in the market. Jolly Board Ltd seems to have done just that! The Company, under the stewardship of the father-son duo, Managing Director Arvind Jolly and CEO Arjun Jolly, has maintained its margins despite significant increases in input cost, (especially raw materials with bagasse prices spiralling 200%). A winning combination of revenue management and cost effectiveness has put in place various measures that have cut costs and improved productivity to maintain margins. Focus on reducing energy requirements and cutting out waste through optimizing energy usage paid off brilliantly too.
Jolly Board has seen some major transformational changes since its inception in 1958 when the Pioneer, Mr. G. R. Jolly set up India’s first fibreboard plant in Mumbai. Though the Mumbai plant was subsequently closed, the Company expanded under the dynamic leadership of the next promoter and current Managing Director Mr. Arvind Jolly and now has three manufacturing units at Aurangabad and Sangli one of which is a dedicated EOU. Cutting edge technology and continuous innovation have helped the Company to remain focused on its mission statement, ‘to become the Largest manufacturer of fibreboards and Bitumen Boards with the Highest level of Product quality at the Lowest cost of production’  Prior to the current recession, the company had registered a triple digit percentage increase in exports in the preceding three years, exporting 70% of its production. The company’s three units produce 100,000 cubic meters of Soft Board annually.
Jolly Bitumen Board, is a specialized product developed by Jolly Board for the export markets and is used in all major construction projects and airports in the Middle East and the Far East. Burj Dubai, Dubai Metro, The Jebel Ali Airport and Ritz Carlton are other prestigious customers. Jolly Boards have also been used in the new Bangkok International airport, Bangkok Metro and Singapore Marina.
While the demand for Jolly Fibreboards remains good, serious raw material procurement challenges have forced the Company to look at alternative products. The company is energized at this dynamic proposition. By streamlining existing machinery, increasing production capacity, better utilization, updating infrastructure with substantial investments in new equipment, Jolly Board is now poised for the manufacture of new products. Going forward, the Company’s focus will be on diversifying into the manufacture of mineral wool, mineral wool products, gypsum boards, and contemporary foam products. Leveraging on its brand value and strong presence in the industry, Jolly Board is enthused about the huge opportunities these lighrweight concrete building materials will open. The Rapid Building Systems enable a construction project cut its building construction time by about 25%. The products have an inherent advantage over wood based products. The proposed manufacture of Pre-cast sections for mass housing projects will find huge markets in the recovering construction and building industry, both international and local.
The Company’s foray into the realty sector has proved to be a successful diversification. In partnership with Lodha Builders, Jolly Board has developed one of the finest IT parks in the country, leased out to corporates like HDFC Bank and Acker Solutions. Buoyed by the spectacular success, the company is working around a blueprint to widen its footprint in the realty sector in several parts of the State.
In challenging economic times, strong leadership is more crucial than ever. The management is proud of what they have achieved especially in the past year. But in all modesty and humility, good leaders are quick to add that there is a lot more to do. To quote Robert Frost: “The woods are lovely, dark and deep. But we have promises to keep, and miles to go before we sleep … “
Latest News